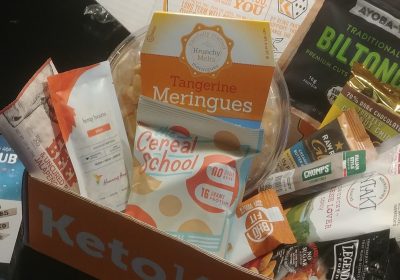 Time to spring into a new season of Keto Krate! This keto subscription has been pretty consistent with its product mix over time, so I have a good idea of what to expect at this point: about two jerky/meat snacks, a couple other savory/salty snack options, some keto-friendly sweet treats, and then maybe a unique ingredient or pantry item.

If you’re a new subscriber, you can take advantage of the 15% discount offer when you sign up here using the Keto Krate promo code TRYKETOWITHME15.

Here’s what was in the April Keto Krate:

First up, a light, sweet treat perfect for spring:

This product was included in a previous Keto Krate in a different flavor. I enjoyed them then, but this tangerine variety is even tastier! They are light and airy little meringue bites with the perfect balance between crunch and melt-in-your-mouth texture (which I guess is where the name comes from). They are also super light in calories/carbs, making it easy to fit a handful into your macros as a snack or treat.

Next up we got two snack bars, both of which I have tried before. This one in particular was last in the November 2018 Keto Krate. Here are some notes from that review:

This bar was last in the October 2018 Keto Krate. My thoughts on the bar are essentially the same:

The texture is nice and soft (not tough or chewy like some protein bars can be) and the flavor is absolutely delicious! On top of all of that, the macros and ingredients are excellent for keto! With only 1 net carb, it’s easy to fit these bars in even with very strict keto. And if the unconventional sweeteners and fibers in other bars make you nervous, these bars use a much smaller (and more familiar) list of ingredients.

Next up, we got a couple of meat-based snacks. The first was a mini snack stick from Chomps, a brand featured on my list of the best keto jerky options. I think this is a new flavor variety from them, so it was pretty cool to get to try it out! I personally was a fan, since it had a nice texture and a great Italian-inspired flavor with oregano and basil. I would have liked to see a full sized snack stick though, or even a pair of the smaller ones.

This brand is also on my list of top keto jerkies! I typically prefer the spicy version of this biltong, but the original is tasty too! Both have the same thin sliced, air dried texture which is softer than most traditional jerkies. The seasoning is noticeable (and tasty!) but relatively mild, which lets the flavor of the meat shine through.

Next, two more savory snacks! I’ll be honest and say I wasn’t quite sure what to do with these. Plain hemp hearts I might add to yogurt or use to make keto “oatmeal” for  a quick breakfast, but these are seasoned with smoked paprika, cayenne, garlic, onion, and other spices. Hemp hearts seem too tiny to eat as a snack on their own, so I ended up adding them to salads for the most part. I liked the kick they added!

I’m a bit picky about “meat bar” type snacks, since I find that the texture can rub me the wrong way if they’re too tough, chewy, or mushy. Thankfully, none of those are a problem here! I really liked both the texture and flavor of this bar. The bacon adds some nice salty, smoky flavor and the jalapeno adds just the right amount of kick. 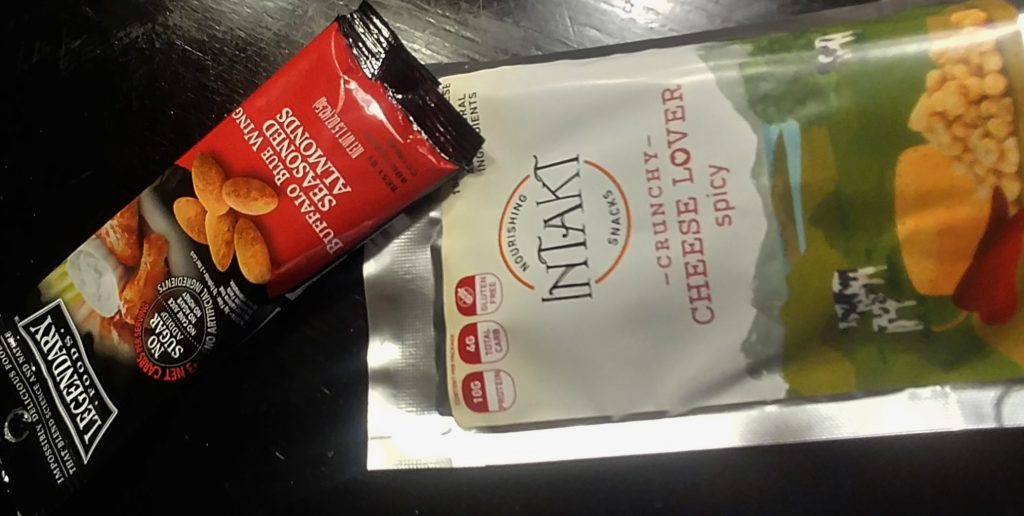 The savory snacks keep coming! These are a favorite of mine. Here are some notes from a past review:

Almonds are a great keto snack on their own, but sometimes they can feel a little routine. Legendary Foods has a variety of different flavored almonds, and these are among my favorites. They aren’t particularly spicy, but they are flavorful, and definitely more fun than a handful of plain nuts.

I’ve also had these before, and they similarly combine cheesy flavors with a bit of kick.

I like the buttery flavor/texture of the cheese used to make these. The flavored varieties add a bit of extra oomph, and I was a fan of this spicy version. It uses chili for heat, rounded out with some cumin and coriander. I definitely enjoyed them.

I actually ordered a variety pack of this low carb protein cereal back when they first launched, but the recipe and shape has changed since then so I was curious to see the difference. The new formula is lower in carbs and has a shorter ingredients, though I actually thought the original recipe was more similar in taste/texture to “real” cereal. The cleaner macros are always welcome though. These puffs are crisp and slightly dry, with a light fruity flavor and mild sweetness.

In addition to the products included in the April Keto Krate, subscribers also received the following discounts:

We also got a recipe for buffalo chicken meatballs using the seasoned almonds from the Krate! You can find most items from the April keto subscription boxes on Amazon here.

This month of Keto Krate leaned a bit more towards the savory side than usual, but I don’t necessarily mind that (and we did still get some sweet treats!) In total, we got 11 items with a total retail value of around $40. It isn’t the highest value I’ve seen from Keto Krate, but I also didn’t really feel like the box was lacking much. I will note that there were a couple repeat products, which was fine for me since I liked them both. I normally don’t see repeats within at least six months or so.

Last year’s summer boxes were pretty impressive if I recall correctly, so I’m definitely looking forward to the next few months of Keto Krate.

You can view past reviews here, and head here to sign up for your own Keto Krate. If you’re a new subscriber, you can take advantage of the $5.99 discount offer when you use the code TRYKETOWITHME15.