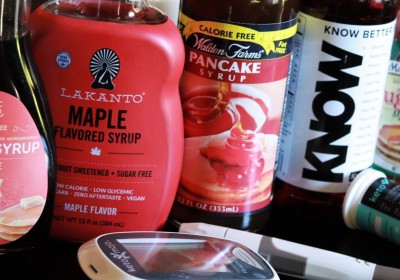 Can you have sugar free syrup on keto? Since my keto pancake recipe is one of my most popular posts, this is a question I get pretty often. There are an increasing number of sugar free maple syrup options out there, and it can be hard to tell at first glance if they will work with a keto lifestyle or if they are too good to be true.

I decided to take a closer look at some of the top sugar free syrup options to actually find out how they affected blood sugar. To test blood sugar/ketones, I used my trusty Keto-Mojo meter (which you can learn more about in my Keto-Mojo review). Note that I’m primarily concerned with the actual blood sugar impact of the sweeteners/fibers rather than the specifics of the ingredient lists.

The five syrups I tested all used different forms of sweeteners and had different amounts of total carbs, so I did my best to test them under the same conditions.

I tested each syrup with my first “meal” of the day, which consisted of:

I checked my blood sugar and ketones before eating, and then again approximately 1 hour later.

Of course, first I needed to know how things would look with no syrup at all…so on day one I just had my keto coffee with a sad, syrupless waffle. Here are those results:

Nothing too shocking here. My ketone levels are always lowest in the morning, and rise after my morning coffee/meal. I was a little bit surprised how little my blood sugar went up, but that’s not too crazy for such a low carb, high fat meal. (For the record, I made my waffles with Lakanto sweetener, which clearly doesn’t seem to have much blood sugar impact for me.)

So did the sugar free syrups kick me out of ketosis? Let’s find out!

I didn’t expect to see any real impact from the sweetener, since the granulated version doesn’t raise my blood sugar or kick me out of ketosis. I was curious to see if some of the other ingredients would have an effect though. Here’s how it turned out:

If those other ingredients have an effect on blood sugar, it must be a tiny one. There was a tiny bump in my blood sugar, but it was basically the same as when I had no syrup at all. 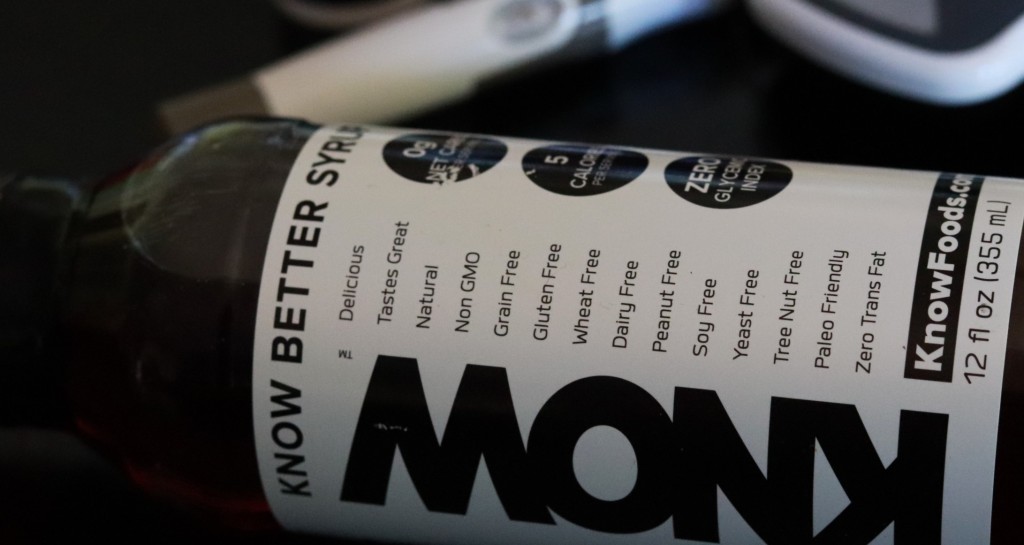 This was one of the sugar free syrups I was most interested in testing out! Allulose is one of the newer “low carb” sweetener options, and seeing it categorized as a “sugar” on nutrition labels has always made me a little nervous. So does allulose syrup kick you out of ketosis?

Looks like it doesn’t! There’s almost 11g of allulose in a tablespoon of this syrup, but despite being listed as a “sugar” on the label, it didn’t raise my blood sugar.

The vegetable fiber in the Lakanto syrup didn’t seem to have much impact, but it’s a much more significant ingredient here so I was curious if that would change anything. This is also the highest total carbs per tablespoon of the syrups I tested. Would it have an effect?

Looks like there was actually a bit of a bump here! It seems like I might be a little sensitive to larger amounts of vegetable fiber, so I’ll need to be careful not to overdo it. With that said, a blood sugar reading of 91 mg/dL isn’t high by any means and is definitely not enough to kick me out of ketosis.

UPDATE: I realized that when I initially ran these tests, I was using the old formula of ChocZero syrup (which has more carbs) instead of the new version with 1g net carbs per serving. Here are the results with the new formula:

This is listed as 0 carbs on the label, but I still decided to test it out. I know a lot of people have mixed feelings about artificial sweeteners and some of the other ingredients in this. So would this sugar free syrup kick me out of ketosis?

Nope! This actually had the smallest impact of any of the syrups I tried, which maybe isn’t surprising since it is listed as having effectively 0 carbs and calories.

Sorbitol isn’t a perfectly 0 glycemic impact sugar alcohol (its glycemic index is 9), but I subtracted it from the net carb count anyway for simplicity. It’s also mixed in with three artificial sweeteners for this sugar free syrup. How did it measure up?

Despite having one of the lower carb counts on paper, this sugar free syrup raised my blood sugar more than any of the others that I tested. I’m guessing that’s due to the sorbitol, although I’m honestly still surprised to see a bump like that from a relatively small amount of it. I only had 1/4 of what is listed as a 1 net carb serving…I might hesitate to have a full serving.

So Is Sugar Free Syrup Keto?

Obviously, this isn’t the most accurate, scientific test. For one, the results are specific to me. You might be more or less sensitive to the different sweeteners, so to be sure, I would recommend picking up a Keto-Mojo or other meter and running your own tests. I also could have gotten more precise results by testing with just the syrups…but frankly, I wasn’t really ready to give up my morning coffee for a week.

Still, it’s possible that the MCT oil in my coffee or the macros of the meal overall impacted how much the syrup affected my blood sugar, so if I really wanted to take a closer look, I could do some syrup only tests.

Still, I’m happy with these results for now. It actually seems like a lot of the sugar free syrup options out there can work just fine within a keto lifestyle without spiking your blood sugar through the roof or kicking you out of ketosis. The key, as with most things, is just to keep an eye on serving sizes and find one that works for you.

So what do you think? Have you found a sugar free syrup that fits your goals? Is there another brand I should test? Let me know in the comments!