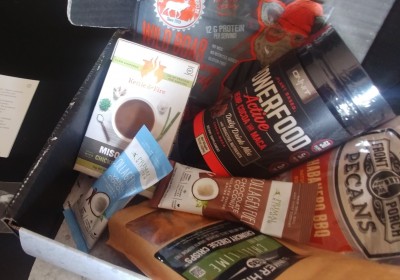 After being pretty satisfied with last month’s Onnit Keto Box, I’m trying it out for another month! It’s definitely pricier than my other keto subscription boxes, but I’m okay with the higher price if it also means higher value items and larger product sizes. Last month offered that with several full size pantry items, so I was excited to see if my second box would hold up.

As a refresher, Onnit Keto Box is a premium keto subscription that costs $55.95 per month. For that fee, subscribers are promised a box “personally curated” by Onnit founder Aubrey Marcus and comedian/former UFC Brendan Schaub to include the “highest quality low-carb snacks and supplements.” It seems to be targeted for those interested in more full sized items and trying out new Onnit products in particular.

Here’s what was in my August Onnit Keto Box:

First up, we got a full sized supplement from Onnit’s own brand:

This is pretty cool! Supplements aren’t found too often in my other keto subscriptions, and when they are, it’s usually just enough to try it once or twice. A full canister of this supplement provides 32 servings, which should be enough for me to feel the effects and decide if I like it. Powerfood Active is a blend of plant protein, cocoa, hemp seeds, maca, and antioxidant-rich red algae. It’s sweetened with stevia and monk fruit.

I’ve had it mixed with just plain almond milk as well as added to iced coffee, and I like the chocolaty taste and that it’s not too sweet. As someone who can be sensitive to the aftertaste of certain plant proteins (especially pea protein), I didn’t find them noticeable here. I’m not sure if I notice a difference yet compared to other protein or “superfood” supplements I use, but it certainly can’t hurt to get in more plant protein and micronutrients. SInce this is just 5g of protein, I don’t have to readjust my macos around it like I might for a more traditional 20g+ protein shake.

Another win for the curation of this box! I love Kettle & Fire Bone Broths, and this is one of their newer products that I’ve been meaning to try so I was happy to see it in the Onnit Keto Box. It’s a simple miso-style soup made with K&F chicken bone broth as a base. One carton provides two servings. You can heat it up either on the stove or in the microwave.

You can sip it by itself, and it’s plenty tasty that way, but I actually ended up using it to make a nice ramen-style dish with shiritaki noodles, salmon, and veggies. It was super satisfying, and I didn’t really need to add any extra seasoning other than a bit of salt. K&F products do tend to be lower in sodium than other products to allow for more customization; I like this, because it means I can add lite salt to get in some extra potassium too.

I’m a big fan of collagen supplements for the health of my hair, skin, nails, and joints, and since I’m a fan of Primal Kitchen as well, I was happy to try these out. Both offer 11g of protein from bovine collagen, alongside healthy fats from coconut milk powder and a bit of fiber from konjac root. They are sweetened with monkfruit extract, and the chocolate version obviously has added cocoa.

Despite being an admitted chocoholic, I actually think I preferred the vanilla version. Both were creamy and delicious when blended with almond milk, but the vanilla really complemented the mild coconut flavor from the coconut milk powder.

Another favorite brand of mine! Front Porch Pecans basically single handedly turned me from someone who was ambivalent about pecans outside of certain breakfast or dessert dishes into a fan of them as a snack all by themselves. I usually pick up the plain sea salt roasted pecans since they are a little more versatile, but I enjoy these too.

The smokey blend of spices is enough here to elevate the flavor of the nuts without overpowering them, which I appreciate. And don’t let the flavor name scare you off if you aren’t a fan of spice; the “habanero” notes are very mild.

As you probably know, jerky is a common keto box inclusion. I got jerky in last month’s keto box too, so I’m curious if that will become a pattern for this box as well. In any case, I’m glad that they seem to be sticking to high value jerky brands. I don’t think I’ve tried Pearson Ranch products before, so it was pretty cool to give them a chance.

This is a wild boar and pork jerky that’s seasoned with a peppery blend of spices. I really liked the hint of kick offered by that flavor blend, though this was a very moist jerky and I do tend to like something with a bit more toughness to it.

I love cheese, and I love cheese-based snacks as well. This brand of cheese crisps is new to me, but is made with 100% cheese (and some added flavoring) like most others so I was pretty confident I would like it. The flavor didn’t necessarily read as “chili lime” to be, but I did pick up on a bit of spice and a bit of citrus.

I think snacking on these with a bit of chorizo and/or pepperjack would really help to emphasize those flavors. I think I’m definitely more likely to have these as a snack than as a salad topper or something like more mild cheese snacks.

The Onnit Keto Box this month also included an informative booklet with information about a vegan keto lifestyle, a recipe using the collagen packets, and a 10% discount for Onnit.com.

My biggest wariness about this box was whether it could consistently be worth its price tag, and with this month’s retail value being about $70, it seems like it can. A lot of that value comes from the Powerfood Active though, so I imagine it could be disappointing if you don’t enjoy or can’t use the “hero” item of the box. I enjoyed it though, along with everything else in this month’s Onnit Keto Box. I liked that only one product was something I’d had before.

I will note that after seeing the vegan keto pamphlet and plant protein supplement, I did sort of hope that this would be a vegan keto themed box. Although I’m far from vegan, I do like to explore more ways to incorporate plant products into my lifestyle when I can. The inclusion of the cheese crisps, jerky, and bovine collagen make it clear that this wasn’t meant to be a vegan themed box though. I still appreciated the info though, and look forward to seeing what the next Onnit Keto Box will hold.

Want to find out too? You can sign up for your own Onnit Keto Box at their website here.